Reaching out of the paperdigm

On October 25 2011, hypertext pioneer Ted Nelson gave a guest lecture at the University of Oslo. The topic was: “Reaching out of the paperdigm” (notice the pun).

Here is en excerpt from a Nelson's own introduction to the presentation:

The computer world pretends to be finished, but never will be. In fact it simulates the past: computers for secretaries, as designed by Xerox in the 1970s, have become our working world. Today's “computer documents” (.doc and .pdf) simulate paper and the fancy printing of long ago. The Web added trivial one-way jumps, allowing pogo-stick travel between pages. But what of deeper connection?

We need deep, live documents of a very different kind for the interactive screen, as foreseen by Vannevar Bush and Douglas Engelbart and others – for annotation and detailed discussion and scholarship, for organizing and decision-making, for lawmaking and litigation, and for entirely new forms of writing. Such profusely connected, living documents are still possible, but require a wholly different infrastructure.

The different infrastructure he refers to is of course Nelson's own hypertext vision, Xanadu. Nelson is not happy about the state of things with modern computers. He started out by giving a brief demonstration of the lastest incarnation of the Xanadu software. Unfortunately, the technical infrastructure in our auditorium did not agree with the equipment he'd brought with him, so the demo did not come of the way he had intended.

He then went on to discuss user interfaces, and in particular the interface he refers to as the “PUI”, or the “PARC User Interface”. This is the now ubiquitous graphical user interface invented at Xerox PARC in the late 1970ies, and subsequently copied by Apple and Microsoft. Nelson points out that all it does is emulate paper on a computer screen, and that it sometimes even does it in a non-interutive way. In its original form, the PUI also took away the end user's right to program, while Unix users have this as their birthright (in the form of the shell that has descended from Louis Pouzin's scripted command-line interface that first appeared in the CTSS and Multics).

He then moved on to discussing hypertext. Nelson himself is of course credited with coining the word “hypertext”. He also gives die credit to Douglas Engelbart and his NLS system, which had richer functionality, allowing the user to link to, and annotate any portion of a document. This functionality, Nelson says, is still missing from the World Wide Web today. Nelson thinks that today's World wide Web, as designed by Tim Berners-Lee, Marc Andreessen and Eric Bina, is flawed by bringing the PUI to hypertext, and also plain wrong by allowing deletions and duplications, and by having hyperlinks embedded into pages instead of being applied to original content already in place at stable addresses. 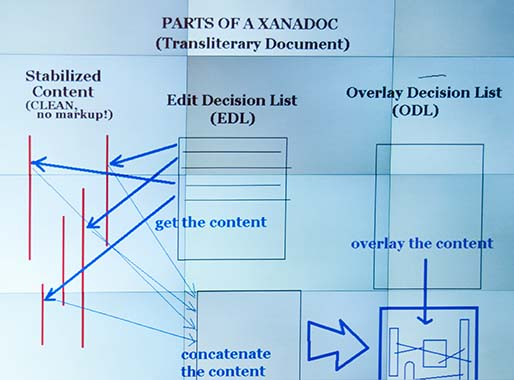 His vision of how hypertext should be is a “transliterary document” (Xanadoc, see diagram above) where all data are stored once at stable addresses, there are no deletions, and presentation is separated from storage by having an “Edit Decision List ” that tells what text to select for presentation from whatever content that is available, and an “Overlay Decision List ” that shows how to present the content. If content at one point is changed, a new version is created, leaving the original in place at a presistent address.

Nelson is of course right about the PUI being just one of many possible graphical user interfaces, and perhaps not even the best one. However the most important part of his contribution is his insistence that hypertext should be a tool for the user (reader), not the publisher. The World Wide Web, as it has emerged, as spawned an entirely new publishing industry. It has also democratized the role of being a publisher (anyone with Internet access can now become a blogger, with is what we now call an amateur publisher on the World Wide Web). But beyond the feeble bookmark function built into web browsers or add-ons like delicious.com, the World Wide Web provides very little for web-users that want to assemble, reuse and annotate material already in place.

Interesting synopsis, I heard him say the same things in 1996 (except the reference to delicious, of course). It is always hard for the parents when children go their own way, but that's life… Anyway, he deserves praise for conceiving the concept.

I have referred to your excellent review in my own Norwegian language blog: Design av brukerinterface er som å lage en film.