Reflections on the Pirate Bay-GGF-deal

According to a press release (no longer on-line) on the home page of Global Gaming Factory X AB, the company has acquired The Pirate Bay website and brand for SEK 60 million (around US$ 7.8 million) of which half is to be paid in cash and the other half in newly issued shares.

GGF CEO Hans Pandeya says that his plan is to turn the site into legitimate business: "We would like to introduce models which entail that content providers and copyright owners get paid for content that is downloaded via the site."

On the face of it The Pirate Bay has just executed phase three of the standard Web 2.0 business plan. 1) Set up a website to give someone else's stuff away for free. 2) Build a huge user base. 3) Sell out.

Following the announcement, angry users are migrating to other torrent tracker sites in droves, expressing their outrage about the sale on their way out. 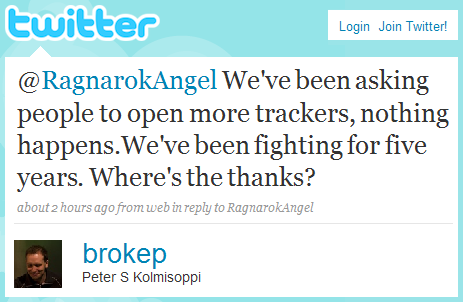 Pirate Bay spokesperson Peter Sunde Kolmisoppi (BrokeP) seems to have been taken by surprise by the hostile reactions. He tweets: "We've been fighting for five years. Where's the thanks?"

I'm not surprised by the fact that the Pirate Bay's founders have become tired, and want to move on. The court decision in April 2009 that ordered the four defendants to pay SEK 30 million in damages and spend one year in prison is no fun. And still running a site that assists users in illegal file sharing will presumably not help the four when they face the court in the upcoming appeal case.

So the sell-out may simply a be ruse by the four to save face. Given their flamboyant rhetoric about copyright piracy is all about freedom of speech and openness of the Internet, they just couldn't bend over and shut down the site. So instead, they sell it, insisting that this is not a sell-out and that the new owner will keep the site running just like it was before. Yeah, right! And if the new owner doesn't do that? Well then it obviously is the new owners that have reneged on the sacred principles of pirathood, not Peter Sunde Kolmisoppi and his colleagues.

The announcement on the Pirate Bay blog also claims that: "The profits from the sale will go into a foundation that is going to help with projects about freedom of speech, freedom of information and the openness of the nets." A very noble move, but not a very believable one, given that the Pirate Bay is notorious for offering absolutely no transparency into the site's financial transactions, and bearing in mind that an offshore foundation with some suitable vague worthy cause is a nice place to hide money from lawyers, bailiffs and taxmen.

OK. The deal makes perfect sense for the Pirate Bay owners. They can bow out gracefully, save face, and even make a profit.

But what about the other party in this deal. What does GGF get for its SEK 60 million?

The Pirate Bay website is a service running on the Internet hosting BitTorrent trackers. It consists of some web servers that are supposed to be hidden in the Sinai desert. It also has some brand recognition in the community of file sharers. That's it.

The Pirate Bay crew has somehow succeeded in persuading its fanbase and part of the media that hosting a torrent tracker on a website is innovation. But as far as I know, the Pirate Bay crew has never developed a new technology, a new business model, a new media delivery model, or anything else that may create or sustain a legitimate business. Publicly funded research created the Internet, Tim Berners-Lee created the web, and Bram Cohen wrote BitTorrent).

The Pirate Bay's value proposition is very simple. It provides its users with access to all the world's most sought after digital content for free. If you take away “content”, or you take away “free”, what remains is a weird brand name (for a non-piracy outfit) and some web servers. In my humble opinion, SEK 60 million is a lot to pay for this.

To complicate matters, the Pirate Bay begot a political movement (sort of), grounded in the site's founders' blatant disregard for copyright law and willingness to make available to the general public free and unrestricted access to other people's creative works.

I still have to figure out pirate politics (and I shall return to that subject in a later posting). The interesting bit in the context of the Pirate Bay – GGF-deal is that the Pirate Bay's use of political rhetoric to cover for its lack of a real business model may prove to be lethal to the site's new owners. Pirate politics seems to be a particular brand of technological determinism that says that if technology makes “something” convenient and easy, that “something” is also “right”. (And that anyone resisting such convenience and ease is a Luddite standing in the way of the future.)

GGF CEO Hans Pandeya's planned business model for the “new” Pirate Bay is apparently to create a marketplace for bandwidth. It will be interesting to see whether he can persuade ISPs to buy back their own bandwidth from file sharers. And how does this buying and selling of bandwidth relate to the the concept of network neutrality? What is clear is that the simple and completely unrestricted free-for-all distribution model of the “original” Pirate Bay cannot remain in place under the new owners. Whatever emerges from the transition will be restricted to whatever legal arrangements GGF is able to make with the content industry. To make matters worse, the “new” Pirate Bay will have to compete with Spotify, iTunes, Napster, MagnaTune and other legitimate marketeers of digital content, as well as a host of other outfits of more dubious legality (e.g. MiniNova, Demonoid, ISOhunt, 1337x).

I wish Hans Pandeya the best of luck with his purchase and with the project that will make the Pirate Bay a legitimate venture. I honestly don't understand why he is paying SEK 60 million for this franchise, or how he plans to fund the purchase. But that, strictly speaking, is none of my business.

(Thanks to Gunnar Roland Tjomlid for corrections to my sometimes awful grammar.)

Very interesting points about the specifics of the sale. In my mind it's never been a good thing that TPB was put on the front of the Intellectual Property debate, by the attacks and attention from the copyright-industries, and this just gives me further reasons to question their suitability as spokepersons on an issue a lot larger than them.

But… Writing anything like this shows an extreme intellectual laziness, unfortunatly far too common:

Pirate politics seems to be a particular brand of technological determinism that says that if technology makes “something” convenient and easy, that “something” is also “right”. (And that anyone resisting such convenience and ease is a Luddite standing in the way of the future.)

Technological determinism has nothing to do with it, though technological evolution has brought to light the final nail in the coffin of a discussion that has been ongoing since the Worshipful Company of Stationers and Newspaper Makers first got the exclusive right to print books, and burn unlawfully printed books, in 1557.

The discussion is freedom of speech Vs censorship through distrubution-monopoly.

And the discussion has grown to include the more immediatly harmful issue of patents.

And strangely, while it was common knowledge in the debates surrounding the Statute of Anne, and later the Bern-convention, now when the copyright-debates are more widespread than ever the argument that it is about free-speech is for the first time in history something that needs explaination. And it is a point that´s almost surgically removed from all mainstream discussion of the topic.

(Which shows that the countless money distribution-monopolies have spent on lobbying and propagandizing for intellectual property the last 100 or so years have been, for them, well spent).

Most modern thinkers, from the far right to the far left and with various stops inbetween, have always acknowlegded the nature of the issue. And while opinions range widely, from limiting copyright down to a shorter period, to reforming it, and to abolishing it completely, most agree that the current laws on intellectual property don´t work, are wasteful, and in many cases harmful. The debate is about how much of this harm is necessary, and of the possibilities of other less harmful legal systems.

As an artist making a living of copyrighted material, it is of utmost importance to me to break free from the dependence of the old distribution-monopolies, and to try and figure out ways of making a living while letting art be as free as art is by its nature. But only a fool would argue that limitting the supply of my goods is a good tactic, when it is one of the few goods that exists with potentially unlimitted demand.

For the world at large it is even more important, because it´s about letting information be as free as it is by its nature, and thereby letting the arts, the philosophies, and the sciences evolve at it´s own pace unhindered by the greed of monopoly.

So… Sorry to derail your otherwise informative article. I hope that when you decide to write about pirate-politics, your arguments will be better informed than what your current article hints about.

But as far as I know, the Pirate Bay crew has never developed a new technology, a new business model, a new media delivery model, or anything else that may create or sustain a legitimate business. (Publicly funded research created the Internet, Tim Berners-Lee created the web, and Bram Cohen wrote BitTorrent).

Their main “trademark” became to not give in for threatening DMCA letters and cease & desist letters full of American lawspeek. Maybe not so innovative business-wise (but hey, look at Twitter redoing the blog concept, etc), but I guess one will have to say (now) that it worked for them.

Besides, have you had a look at some of their other web services. They are not new media delivery models, but they are kind of innovative or filling a niche demand not covered by (m)any else – e.g. http://bayimg.org or http://slopsbox.com? These services wouldn't have still existed if there weren't a demand/need for such services.

But I will have to agree with you on the point that it's not obvious – or it won't be easy – for GGF to earn on this deal. Perhaps their biggest ROI from this investment will be from publicity…