Earlier tonight, I attended a lecture by Cory Doctorow at Norway's prestigious Polyteknisk Forening. The talk, about the Economics of Openness, was great. It has been blogged by Espen Andersen, Jon Lech Johansen and Brilliant Days (in English); as well as Håkon Styri, Jorunn Danielsen Newth and Alf Kåre Lefdal (all in Norwegian). 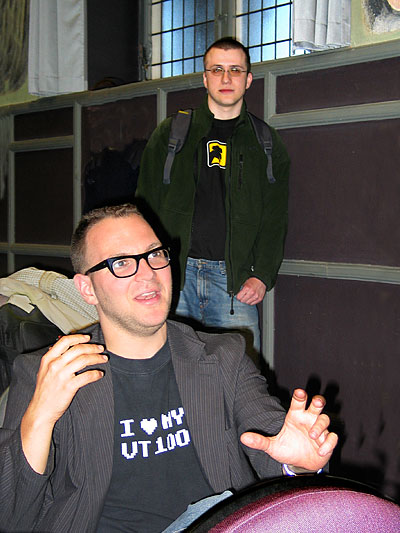 Herman Robak recorded it on video: the talk, the debate, and three minutes of the after-talk session (see below).

There was a very interesting after-talk session where Cory related his experiences as an EFF delegate to the World Intellectual Property Organization (WIPO), which is affiliated by the UN – an outfit that he has characterized as having "the same relation to bad copyright that Mordor has to evil".

The WIPO was not exactly overjoyed that NGOs such as the EFF had started to pay attention to their business. Somebody mysteriously removed the floor papers provided by the public interest NGOs (but no-one else), basic logistic services such as copying was not available to the NGOs, and at some meetings, they introduced new measures limit the access to the floor for "ad hoc observers" (e.g. NGOs) on in favour of "permanent observers" (i.e. the IP industries). Also each NGO only had the floor a single time during each session. No rebuttals would be allowed.

How do the NGOs combat such opressive tactics? By laptops, WiFi and blogs! Instead of waiting months for the official minutes from the meetings to be published, minutes were blogged while the meetings were going on, and published on the Internet immediately. That meant that activists in developing nations could get real-time reports on the proceedings, and keep a track on their governments voting record. But more important, it meant that the NGOs would be able to present rebuttals and challenge falsehoods, even with the tight speaking schedule. What would happen was that one kept a track of the next NGO scheduled for the floor, and used instant messenging to get a 30 second prepared rebuttal up on that person's screen just before he or she was scheduled to speak. In short: the NGOs used the technology in innovative ways to, among other things, do relay rebuttals.

Having instant Internet access also meant that facts could be checked on the fly, and that the information monopoly that up to that point had allowed the "permanent observers" from the IP industries to behave like a fox in a henhouse at WIPO meetings had been broken. While it probably is a long way to go before WIPO actually lives up to it promise to "promote creative intellectual activity," and facilitate the transfer of technology related to intellectual property to developing countries, "in order to accelerate economic, social and cultural development" (art. 1 of the 1974 Agreement between the UN and the WIPO), the fact that NGOs and civil society now are getting involved, along with the representatives from developing nations such as Brazil and India that are beginning to inderstand how bad patent and copyright law can be used against the developing world, things may start to change.