In april 2010 the late Apple CEO Steve Jobs wrote an unusual essay with a series of technical objections to using Flash on mobile devices.

This week, Adobe conceded, and said it will no longer develop its Flash software for use in the browser programs that come with smartphones and tablet computers. Its upcoming release of Flash Player 11.1 for Android and BlackBerry will be the final mobile update for these platforms. Instead, Adobe will increase its support for HTML5, CSS, and Javascript – i.e. a standard suite of standard open technologies backed by Apple, Google, Microsoft and RIM.

For more than a decade, Flash has enabled the richest content to be created and deployed on the web by reaching beyond what browsers could do. … However, HTML5 is now universally supported on major mobile devices, in some cases exclusively. This makes HTML5 the best solution for creating and deploying content in the browser across mobile platforms. 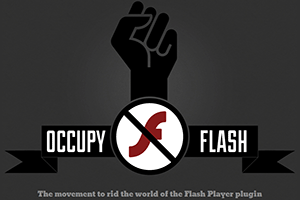 The controversy between Apple and Adobe over Flash has been one of the tech world's most visible disputes. As focus for web development now shifts from PCs to mobile devices such as smartphones and tablets, it has become impossible for Adobe to ignore that Apple's steadfast refusal to allow Flash on its popular mobile products makes Flash increasingly unattractive to programmers as a cross-platform development environment. While there are more phones and pads running Google's Android software (many of them pointedly advertising their Flash compatibility), no products captured the public's imagination, and attention, like Apple's.

I was not a fan of the late Steve Jobs, but I think his thoughts on Flash was spot-on. Even as a multi-media container, Flash was a spaghetti-ball piece of technology with erratic performance and security problems. As an evironment for presenting multi-page on-line content, it was an abomination, alien to the spirit of the web.

In the Microsoft camp, Steve Ballmer also is on record saying that HTML5, not Microsoft Silverlight, is the universal technology for web multimedia content. In a 2010 interview at Gartner's IT Symposium he responded, when asked HTML vs Silverlight:

Universal, no question, world is going HTML5. The world is pushing down HTML5 path and so are we.

This means that there is major industry backing behind HTML5, which is good news.

There is still some controversy about video codec for HTML5. Currently Apple and Microsoft are behind H.264/MPEG-4, while Opera and Firefox are behind Ogg Theora. There exists hardware implementations of H.264, which is an advantage for mobile decives both in terms of speed and battery use. However, H.264 is patented, and this means that it cannot be deployed in free software unless the patents owners makes it royalty free. Ogg Theora is free, but currently less suitable than H.264 for mobile devices.