The following excerpt from street artist Banksy's 2004 pamphlet Cut it Out (titled Brandalism) have made the rounds on the 'net lately:

People are taking the piss out of you everyday. They butt into your life, take a cheap shot at you and then disappear. They leer at you from tall buildings and make you feel small. They make flippant comments from buses that imply you're not sexy enough and that all the fun is happening somewhere else. They are on TV making your girlfriend feel inadequate. They have access to the most sophisticated technology the world has ever seen and they bully you with it. They are The Advertisers and they are laughing at you.

You, however, are forbidden to touch them. Trademarks, intellectual property rights and copyright law mean advertisers can say what they like wherever they like with total impunity.

Fuck that. Any advert in a public space that gives you no choice whether you see it or not is yours. It's yours to take, re-arrange and re-use. You can do whatever you like with it. Asking for permission is like asking to keep a rock someone just threw at your head.

You owe the companies nothing. Less than nothing, you especially don't owe them any courtesy. They owe you. They have re-arranged the world to put themselves in front of you. They never asked for your permission, don't even start asking for theirs.

The quote is clever, cool and contumacious, but it is also dated. As noted, Banksy wrote this is 2004, when he still was a struggling street artist. Since then, Banksy has put up a lot of advertising for himself in public spaces. And he has done so without asking anyone's permission. Advertising which has paid off quite handsomely. And unlike the corporate advertisers he thinks he has the right to vandalise, he doesn't pay a penny for his own use of public space. 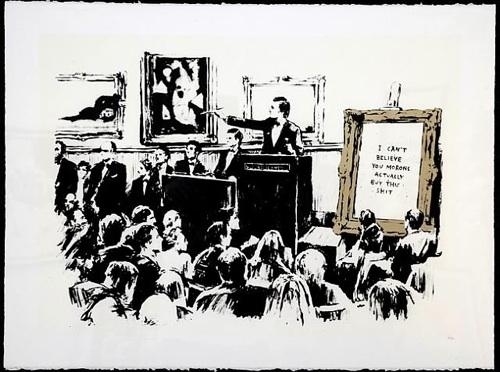 After all, it is somewhat ironic that Banksy has been so successful in marketing himself as a rebel artist that original Banksy-branded anti-establishment art that is put up for auction these days frequently sells for more than six figures in British pounds, making it only affordable for the establishment it purports to protest. 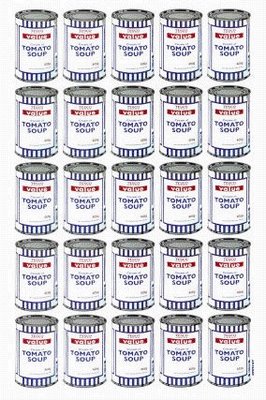 Of course, Banksy is well aware of this irony, and – true to form – is capable of monetising it. After Bombing Middle England reached a GBP 102 000 at Sotheby's in early February 2007, and British broadcaster Charlie Brooker argued that Banksy's artwork only “look clever to idiots”, Banksy seemingly agreed to Brooker's argument by appropriating an victorian newspaper image showing bidders at an auction and inserting the phrase “I can't believe you morons actually buy this shit”. That image, by the way, sold for GBP 5250 at an auction in London in 2008. Not six figures, but still a nice sum for an image that clearly was intended as a joke.

Banksy, perhaps more than any artist since Warhol, is really exploring the tenuous link between advertising and art. His rant against advertising quoted above is of course an advertisement (for himself).

Banksy has even acknowledged his debt to Warhol, with a series of Warhol inspired pastiches, including a poster repeating a facsimile of 25 identical Tesco soup cans, a slacker version of the series of 32 different Campbell soup cans Warhol hand-painted in 1962.

Like Warhol, Banksy may have started out as a rebel. However, I think that his current direction imitates Warhol not only in style but in purpose: He risks ending up as a mildly amusing purveyor to the chattering classes of a domesticated and completely safe pseudo-rebellious message in the shape of privately owned artworks.

It is, of course, both profitable and funny, but not really subversive.

Are you saying that the quote loses validity due to its author's recent prosperity?

While there are certainly problems with the quote, it is probably best to judge it on its own merits.